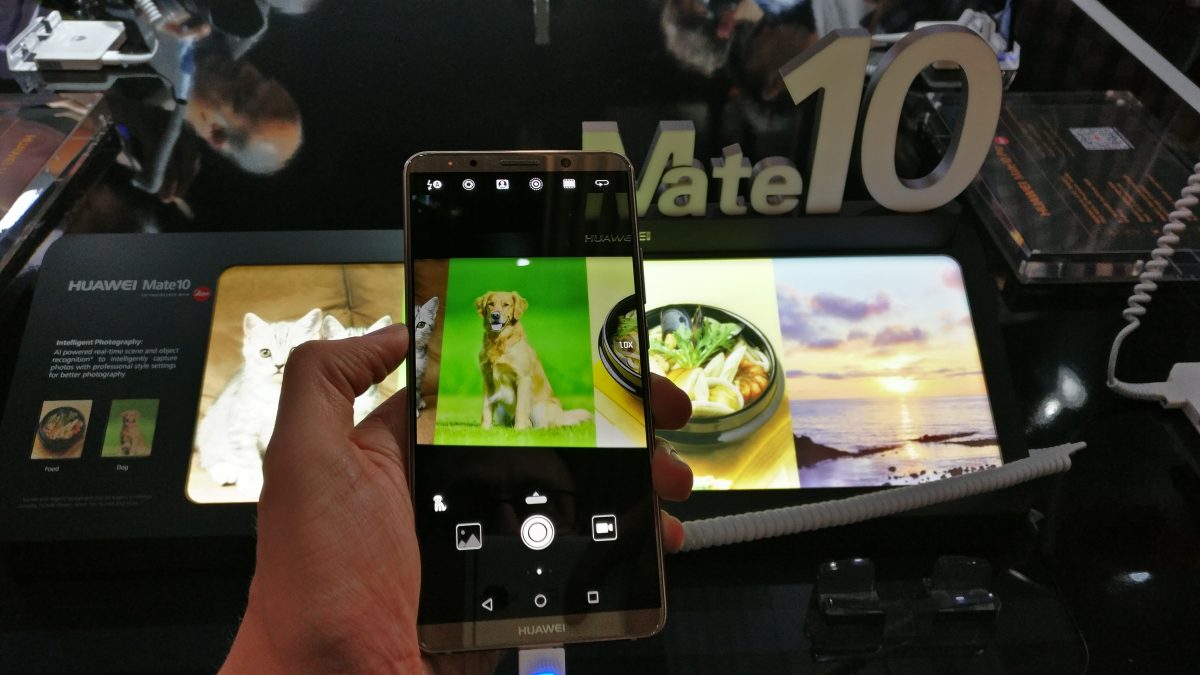 By Ryan Daws | October 16, 2017 | TechForge Media
Categories: Machine Learning,
Ryan is an editor at TechForge Media with over a decade of experience covering the latest technology and interviewing leading industry figures. He can often be sighted at tech conferences with a strong coffee in one hand and a laptop in the other. If it's geeky, he’s probably into it. Find him on Twitter: @Gadget_Ry

Huawei unveiled its latest Mate 10 flagship smartphone at a dedicated event in Munich today, and its AI prowess lives up to the expectations the company set beforehand.

When our invite came through we couldn’t pass on the opportunity to see the device for ourselves. Huawei has openly mocked Apple for boasting of the company dipping its toes into AI with the iPhone X, but ultimately with a lack of ambition that’s left it looking far behind what Android phones have accomplished for years.

The problem with AI efforts on Android is that it’s largely been performed in the cloud by Google, and some people understandably have some trust issues with that. Apple will process all data locally with a dedicated AI chip.

However, Huawei has beat Apple to the punch and can now claim the prestigious title of the world’s first smartphone with a dedicated NPU (Neural Processing Unit).

A dedicated chip for processing AI is sure to bring significant improvements, but just how much is up for debate. Huawei claims performance can increase up to 25x over a CPU/GPU and efficiency can be improved up to 50x. The caveat is that it’s “based on Huawei’s own internal testing.”

In those same internal tests, Huawei pitted the Mate 10 Pro against an iPhone 8 Plus and a Samsung Galaxy Note 8 to recognise 100 photos. Huawei’s device completed the benchmark in just five seconds, Apple’s in a respectable nine seconds, while Samsung’s trailed behind at 100 seconds.

Across the device, Huawei is putting AI to good use. Almost everything is optimised in some respect by intelligent behaviour prediction, content awareness, and resource allocation.

With these AI-driven improvements, system response speed is claimed to have been increased by 60 percent, and the smoothness of operation by 50 percent. Certainly, in our hands-on demo of the Mate 10 line, the performance was buttery smooth – but it’s hard to say whether this was truly due to AI or the usual chip improvements we see each year.

Cameras are one of the most important features to consumers in a new smartphone, and we’ve seen AI drastically improve photography to almost DSLR standards from fairly average image sensors. Google often tops camera benchmarks like DxO with their Pixel smartphone line, but I’d be surprised if Huawei doesn’t come close or even beat Google’s efforts from my time spent with the Mate 10.

Huawei trained their AI with over 100 million images so it can recognise various scenes and their contents quickly and optimise the settings accordingly. On stage, we saw the camera excel in difficult environments such as motion scenes, in low light, and while directly facing a light source.

If you review handsets you’re almost trained to ignore these images, but I can confirm the demo I received after had just as impressive results. Make sure you head to a store to try it for yourself and I’m almost certain you’ll leave impressed.

What’s more impressive, however, is the speed in which various scenes are recognised. When taking a picture, an icon in the bottom left will indicate automatically what the camera has detected – whether it’s a sunset, food, specific pets such as a dog or cat, and more. This was performed almost instantaneously.

If like me, you often find yourself taking pictures of documents, Huawei even has an AI-optimised mode which “intelligently enhances” zoomed-in pixel quality. Naturally, this was compared to the iPhone…

Translation is another area where AI can shine, and Huawei is baking it directly into their devices. The company is using Microsoft’s translation service for the instant translation of over 50 languages via text, image, or voice, and it can even do so offline.

A demo booth was set up, but curiously there was nothing to actually translate. I pulled up a German menu on my phone and attempted to translate it, but it had problems and was very slow. I was told it was due to poor internet connectivity but the languages were showing as downloaded.

I’m not yet sold on this feature being ready for prime time, but the device is technically pre-launch so it will likely be ironed out by launch. If this is a major selling point for you, however, then wait for reviews after its official release.

If you’ve ever had to take a call where you’ve had to whisper, it can be difficult for the other person to hear. Similarly, in a noisy environment such as a concert, the background noise can drown out your voice. Noise cancelling technology has existed for some time but Huawei is going further with the aid of machine learning.

There’s little point in packing tons of great features into a device if it’s not going to last the day. Fortunately, Huawei’s claims to last up to two days with some proper use.

Huawei claims to achieve this impressive battery life with a combination of factors. First, there’s a giant 4,000mAh battery which is a considerable bump up over most competitors (such as the 3,300mAh battery in Samsung’s Galaxy Note 8.) Next is the OLED RGBW display technology which delivers a 2K resolution panel that sips, rather than gulps, the battery. Then, of course, there’s a more efficient CPU in the Kirin 970 Finally, of course, is the AI optimisations, but to what degree this boosts the Mate 10’s battery life over the other improvements is unclear.

Huawei CEO Richard Yu teased this as being just the start for Huawei and AI. In fact, quite possibly for the Android platform as a whole.

Yu brought Jamie Rosenberg, VP of Android and Google Play, on-stage to tease the Android Neural Network API being launched early next year as part of the vision to build an open AI ecosystem and unlock powerful new abilities for developers.

AI has touched every software part of Huawei’s new flagship in some regard, so it’s little surprise the company made such a big deal of it prior to today’s announcement. Even the most mundane areas of the phone have been made interesting by the inclusion of AI.

All things considered, the Mate 10 is the most exciting smartphone launch I’ve witnessed in some time. Huawei has proven it’s still possible to innovate in the smartphone market.

Update 17/10: After spending a day, or less as the case may be, we have to mention our pre-release unit is suffering from awful battery life and is not meeting the lofty claims made by Huawei. Our device went from 100 percent at 7:30am to dying six hours later around 1:30pm with some moderate productivity use but no gaming, watching videos, or other intensive tasks. For an hour and a half of that time we even had airplane mode on while on a flight which should have further reduced battery consumption. The AI may take a few days to optimise battery usage, but we’d expect a lot more from the sheer 4,000mAh size of the battery alone.

Update 18/10: Huawei discovered a “Google bug” and deployed an OTA update to fix the battery drain issue within 24 hours. The company has to be commended for a quick response.

Are you impressed with Huawei’s new AI features? Share your thoughts in the comments.