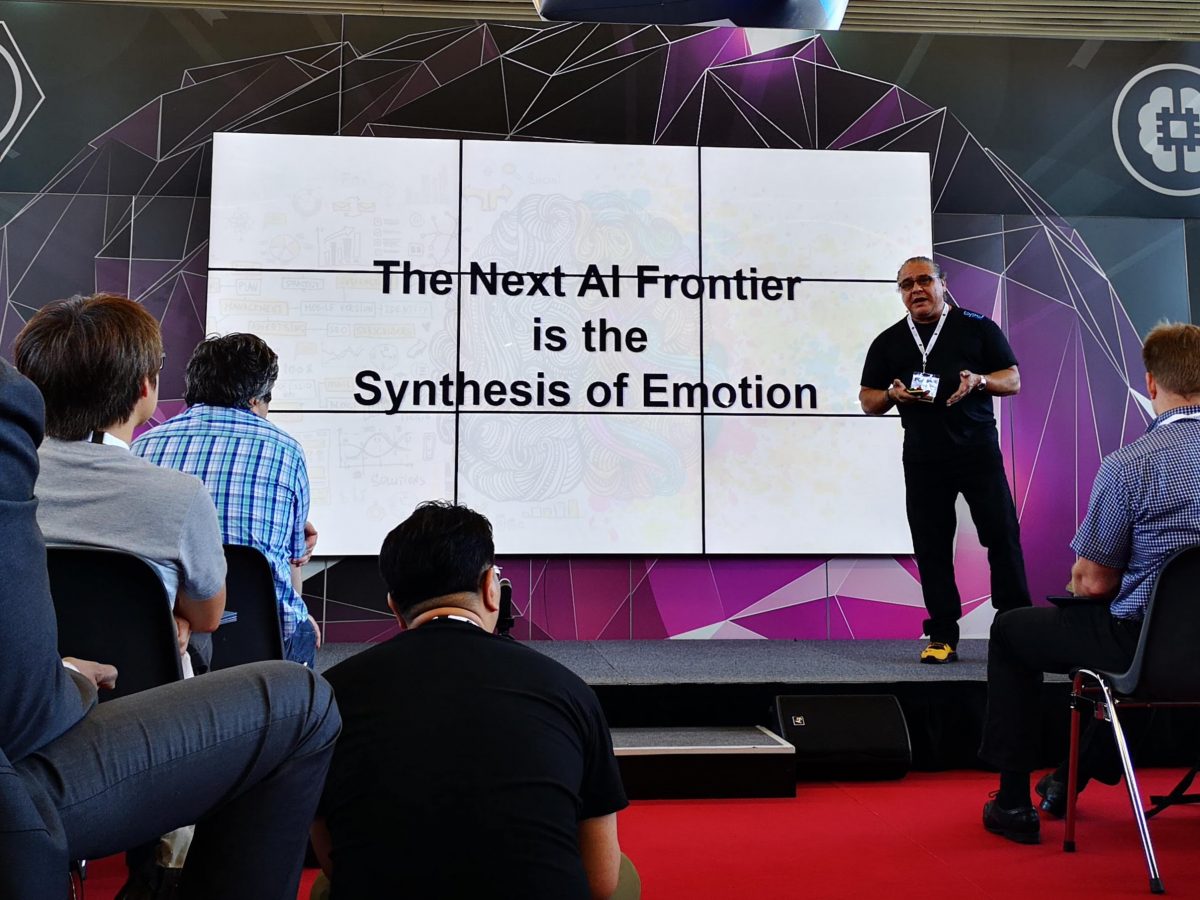 By Ryan Daws | June 28, 2018 | TechForge Media
Categories: Developers, Healthcare, Machine Learning, Society,
Ryan is an editor at TechForge Media with over a decade of experience covering the latest technology and interviewing leading industry figures. He can often be sighted at tech conferences with a strong coffee in one hand and a laptop in the other. If it's geeky, he’s probably into it. Find him on Twitter: @Gadget_Ry

Machines are becoming increasingly smart thanks to artificial intelligence, but they still remain cold, logical, and lacking emotion. Worse still, they have a bias problem.

“We are teaching the machine to synthetically emulate emotional intelligence to better relate to how you and I feel,” states Nevarez.

“So many exciting applications present themselves to enhance healthcare analytics, market assessment, consumer and voter sentiment, and delivering customised content in the Internet of Things.”

Nevarez recounted a time he was out with his son and they saw a person fall. His son laughed, but – when Nevarez explained the person could be hurt – his son became empathetic. Over time, his son recognised when to show empathy.

AI learns from patterns, and Nevarez believes – much like his son – they can be taught with empathetic values.

The company started with political forecasting. Politics, as we all know, is very much driven by sentiment and ideologies.

In the past couple of years, there’s been some major elections and decisions not many saw coming.

Navarez applied BPU’s emotional computing engine to the US Presidential Elections for a personal project. Based on its analysis, Donald Trump was going to win.

“I wanted to see if our emotional computing engine would come close to predicting the outcome of the election,” recalls Navarez. “After watching the election for about eight weeks, and not really getting a ton of data – because it was just me and I didn’t have the computing resources of the company – I came up with the prediction that Donald Trump was going to win.”

“We called our engineers and said there’s something wrong with our algorithms, it’s predicting Trump is going to win.”

There is very little polling done via telephone anymore, it’s mostly online. This has increased accuracy as people are more honest online.

“People tend to be more honest when they’re flaming someone on Twitter,” comments Nevarez. “When people ask [in person] ‘How do you feel about this candidate?’ then people want to be nice, they don’t want to hurt someone’s feelings.”

For a customer this time, BPU attempted to predict the Korean elections.

Twitter is less used in South Korea and Nevarez was sceptical it would be accurate. However, yet again, it was able to correctly predict the outcome leading to the election of President Moon Jae-In.

BPU even released its results on the morning of the election, days before traditional pollsters. The worst margin of error was just two percent.

For a final example, BPU showed how it correctly ranked the results of the Nevada US House District Republican Primary election.

The examples prove BPU’s sentiment analysis works. However, it’s understanding an individual’s emotions and helping to alter them (for the better) which could have the greatest impact.

AI will, and is, revolutionising healthcare. It’s also one of the areas where empathy is most needed.

aiMei is an app created by BPU which offers personality tests and mood analysis in a chatbot-like interface. The company made a version of it for the medical industry where a physician can train it for a patient’s needs.

The app could ask whether a person has taken their ibuprofen yet, for example. Being a tablet known for causing stomach irritation when taken on an empty stomach, it could ask whether the individual has eaten yet or not.

A bit later it could ask if the person wants a snack, pre-programmed with those available that day, so a nurse doesn’t have to go and check with each patient.

Finally, the patient may be asked to provide their mood – or how they’re feeling – an hour or so after, to know whether the medication is working or not.

Physicians have reportedly said to BPU that, while they can go monitor things like temperature, they’re unable to keep a record of a patient’s mental wellbeing – but they’d like to.

Salim Hariri, Ph.D., co-director of the Natural Science Foundation and The Center for Autonomic Computing at the University of Arizona, recently stated: “Among many other applications, BPU’s AEI technology shows great potential for healthcare advances in patient emotional and critical assessment.”

The company also has a smartwatch app which can detect when a person’s heart rate is accelerating and look for the potential reason.

By collaborating with a heart surgeon, the smartwatch app is able to accurately predict five minutes before a cardiac arrest is going to occur. This means health professionals can be alerted earlier to begin preparations which could be life-saving.

Outside healthcare, BPU has also produced a personalised news app called Neil which determines a user’s individual emotional reaction to articles in order to serve up more or less of similar coverage.

All of these apps, Nevarez says, is providing the company with a good look at the human emotional genome and helping it to create frameworks that help anyone build empathetic apps.

Find out more about AI Expo and the next event here.

Do you think we should be teaching AI to feel as well as think? Let us know your thoughts in the comments.