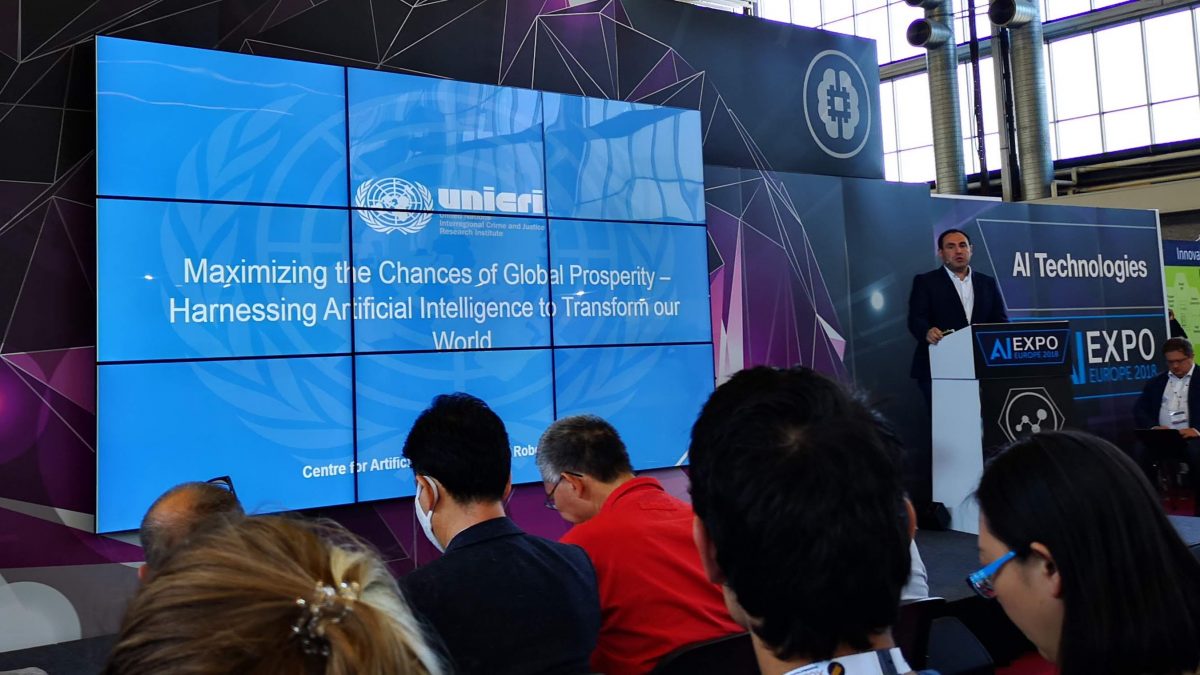 By Ryan Daws | July 2, 2018 | TechForge Media
Categories: Ethics & Society, Healthcare, Legislation & Government, Machine Learning, Manufacturing, Privacy, Robotics, Surveillance,
Ryan is an editor at TechForge Media with over a decade of experience covering the latest technology and interviewing leading industry figures. He can often be sighted at tech conferences with a strong coffee in one hand and a laptop in the other. If it's geeky, he’s probably into it. Find him on Twitter: @Gadget_Ry

Speaking at AI Expo in Amsterdam, Irakli Beridze from the AI and Robotics Centre at UNICRI provided his thoughts on how AI will transform our world.

Irakli started with a positive note that’s easily forgotten: never has the world been more safe, connected, and prosperous.

“We have developed technologies which have the potential to solve problems we never thought were possible,” says Beridze. “Most of them are related to the UN’s sustainable development goals.”

A look at the statistics provides evidence of a huge reduction in those dying from violence or living in extreme poverty. Many of the greatest threats we face today are shared challenges such as climate change, disease, and dwindling resources.

AI is a powerful tool which can help with all these challenges and more if we, as humankind, choose to use it this way. Alternatively, it could pose an existential threat.

Here are just some of the ways Beridze expects AI to aid the UN towards its goals:

Beridze dives deeper into some other potential benefits of AI to societies. A couple of the most interesting suggestions are its use to improve health and wellbeing, and to maintain peace, justice, and strong institutions.

Starting with health, Beridze highlights the use of AI to analyse large quantities of healthcare data in order to make scientific breakthroughs. Furthermore, it could be used to predict and project disease outbreaks to reduce mortality rates.

The impact of AI on healthcare is among our most covered subjects here on AI News. There are exciting developments on a near-daily basis.

Next up is the potential for AI when it comes to peace, law, and governance. Beridze believes AI can be integrated within an ‘e-government’ to reduce discrimination, prejudice, and corruption.

AI currently has a well-documented bias problem. However, solutions are becoming available to ensure the algorithms behind AIs are fair and do not favour any part of society over another. It’s ultimately easier to make a machine less discriminate than a person.

Global powers are seeking to establish themselves as leaders in AI. China and the US continue to be dominant by pumping billions of cash into developments, while smaller economies are playing to their own strengths.

Countries such as Japan are strong in fields such as robotics. The EU has the highest number of service robot manufacturing. Meanwhile, the UK is known for its leadership in ethics and strong academic attributes with leading universities.

There’s a now famous quote from Russian President Vladimir Putin speaking about AI which said: “Whoever becomes the leader in this sphere will become the ruler of the world.”

Putin’s quote was received in many ways. Some believe it was simply a matter of fact, while others saw it as confirmation of a potentially reckless race between world powers to become a leader.

Regardless of what states do, criminals will seek to exploit AI for their own gain. This could take many forms, but one clear example is that of impersonation.

During Google’s I/O conference this year, the company showed off its Duplex demo where an AI assistant called a hair salon on a user’s behalf and was convincing enough to pass for a human. By training such a system with someone else’s voice, fraud could be completely automated.

Beridze will be meeting with Interpol next month to discuss the new risks posed by criminals using artificial intelligence, and how law enforcement agencies can work to counter them.

“When talking about the good sides of AI, we should never forget about the possible risks,” warns Beridze. “One of the biggest risks is the pace of development with how quickly it’s being developed and how fast we can adapt to that.”

One major concern is the potential impact on jobs. Low-wage workers are particularly threatened by automation.

“We don’t really have any solutions,” Beridze says. “We have some ideas that have been put on the table such as; Universal Basic Income, retraining of the population, some even say to slow down the pace of innovation.”

Other concerns highlighted by Beridze includes automated weapons, superintelligent systems like SkyNet famously depicted in the Terminator movies, and using things such as bots to influence democratic processes.

One of the most interesting uses for AI is for the verification of incidents where nations do not trust each other. This has perhaps been seen most often between Western nations and Russia where there’s still a clear level of distrust.

Take the recent chemical attack in Salisbury, UK on a former spy and his daughter. Western nations agreed it could only have been carried out by Russia. For its part, Russia denies the allegations and claims to have been locked out of seeing any evidence.

Beridze served as a special projects officer at the OPCW (Organisation for the Prohibition of Chemical Weapons) prior to joining UNICRI.

The OPCW is an independent organisation working alongside the United Nations that investigates chemical attacks. Members of OPCW represent around 98 percent of the global population.

Until a ruling last week, the OPCW was prohibited from assigning blame for a chemical attack. In Salisbury, the organisation stated it agreed with the UK’s findings the nerve agent of the kind first developed by the Soviet Union.

There have also been multiple chemical attacks in Syria. One particularly devastating attack in Douma was to be investigated by the OPCW but investigators claim they were blocked from accessing the site by Syria and its Russian allies.

Investigators were eventually provided access over a week after. However, Chlorine – at least one of the suspected chemicals used – is notoriously difficult to detect even a day after because of its gaseous state.

Russia and Syria both reject claims that chemical weapons were used. Moscow has offered several narratives on Douma, claiming simultaneously that there never was an attack and that it was the work of rebels in the area.

France said it was likely the evidence is gone, and the USA accused Russia and Syria of tampering with the site.

When everyone is pointing the finger at each other, there needs to be independent verification. Whenever people are involved there’s nearly always some accusations of foul play.

A provably unbiased, open-source AI which examines the evidence could be the answer.

“The time has come where we should employ technologies like AI and blockchain to start verification of issues where countries do not trust each other,” says Beridze. “We need to make a major leap from a system created in the [19]40s, to 80 years down the road where we live in a completely different world.”

Beridze’s session highlighted both the near-limitless potential for AI to have a positive impact on the world, or it could just as easily be devastating.

One thing is for sure, AI will transform our world. For better or worse, that’s up to all of us.

You can watch our interview with Irakli Beridze below:

Find out more about AI Expo and the next event here.

What impact do you think AI will have on the world? Let us know in the comments.