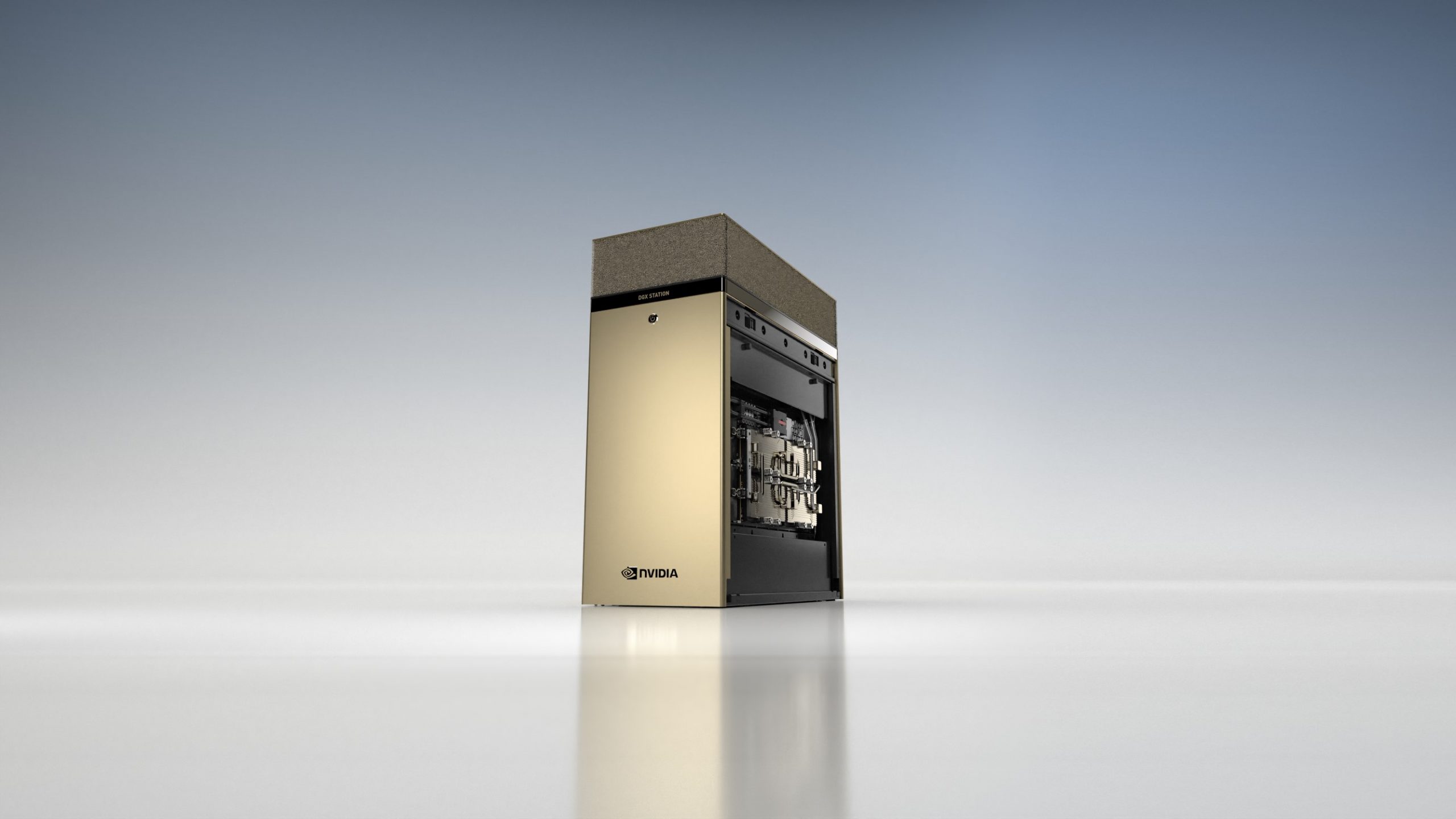 By Ryan Daws | November 16, 2020 | TechForge Media
Categories: Hardware, Machine Learning, Nvidia,
Ryan is an editor at TechForge Media with over a decade of experience covering the latest technology and interviewing leading industry figures. He can often be sighted at tech conferences with a strong coffee in one hand and a laptop in the other. If it's geeky, he’s probably into it. Find him on Twitter: @Gadget_Ry

NVIDIA has unveiled its DGX Station A100, an “AI data-centre-in-a-box” powered by up to four 80GB versions of the company’s record-setting GPU.

The A100 Tensor Core GPU set new MLPerf benchmark records last month—outperforming CPUs by up to 237x in data centre inference. In November, Amazon Web Services made eight A100 GPUs available in each of its P4d instances.

For those who prefer their hardware local, the DGX Station A100 is available in either four 80GB A100 GPUs or four 40GB configurations. The monstrous 80GB version of the A100 has twice the memory of when the GPU was originally unveiled just six months ago.

“We doubled everything in this system to make it more effective for customers,” said Paresh Kharya, senior director of product management for accelerated computing at NVIDIA.

NVIDIA says the two configurations provide options for data science and AI research teams to select a system according to their unique workloads and budgets.

“DGX Station A100 brings AI out of the data centre with a server-class system that can plug in anywhere.

Teams of data science and AI researchers can accelerate their work using the same software stack as NVIDIA DGX A100 systems, enabling them to easily scale from development to deployment.”

The memory capacity of the DGX Station A100 powered by the 80GB GPUs is now 640GB, enabling much larger datasets and models.

DGX A100 640GB configurations can be integrated into the DGX SuperPOD Solution for Enterprise for unparalleled performance. Such “turnkey AI supercomputers” are available in units consisting of 20 DGX A100 systems.

Since acquiring ARM, NVIDIA continues to double-down on its investment in the UK and its local talent.

“We will create an open centre of excellence in the area once home to giants like Isaac Newton and Alan Turing, for whom key NVIDIA technologies are named,” Huang said in September. “We want to propel ARM – and the UK – to global AI leadership.”

NVIDIA’s latest supercomputer, the Cambridge-1, is being installed in the UK and will be one of the first SuperPODs with DGX A100 640GB systems. Cambridge-1 will initially be used by local pioneering companies to supercharge healthcare research.

“Because of the massive size of the datasets we use for drug discovery, we need to push the boundaries of hardware and develop new machine learning software.

We’re building new algorithms and approaches in addition to bringing together the best minds at the intersection of medicine, genetics, and artificial intelligence in the UK’s rich ecosystem.

The use of AI for healthcare research has received extra attention due to the coronavirus pandemic. A recent simulation of the coronavirus, the largest molecular simulation ever, simulated 305 million atoms and was powered by 27,000 NVIDIA GPUs.

Several promising COVID-19 vaccines in late-stage trials have emerged in recent days which have raised hopes that life could be mostly back to normal by summer, but we never know when the next pandemic may strike and there are still many challenges we all face both in and out of healthcare.

Systems like the DGX Station A100 help to ensure that – whatever challenges we face now and in the future – researchers have the power they need for their vital work.

Both configurations of the DGX Station A100 are expected to begin shipping this quarter.