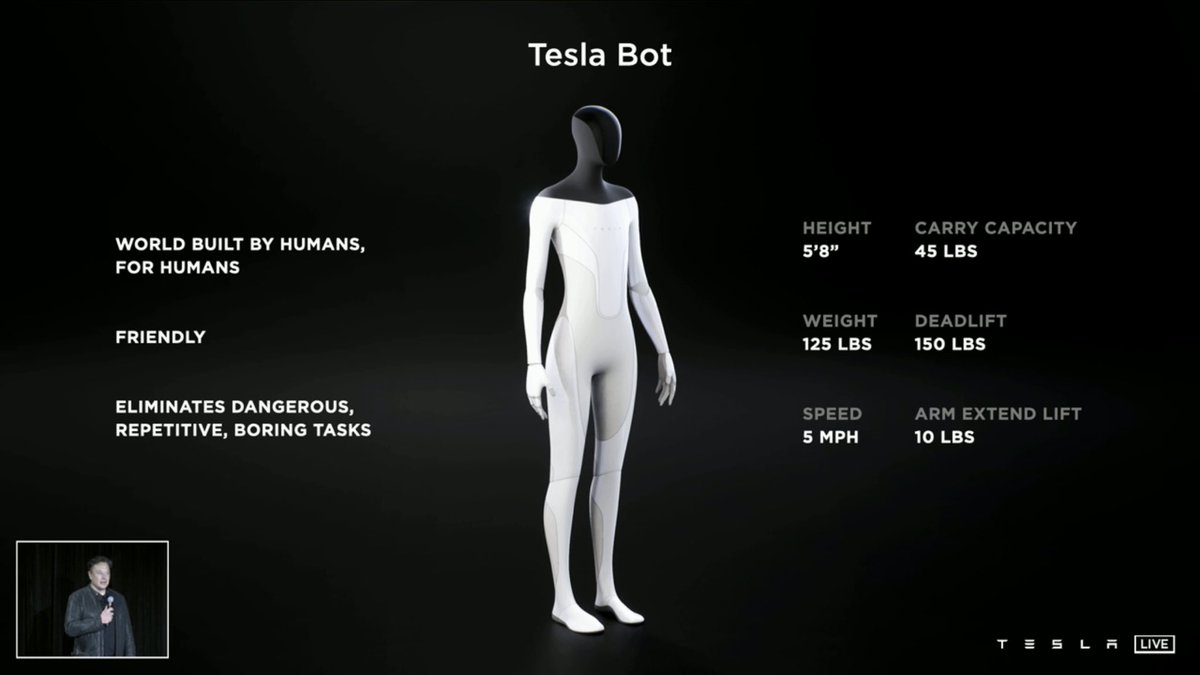 By Ryan Daws | August 20, 2021 | TechForge Media
Categories: Robotics,
Ryan is an editor at TechForge Media with over a decade of experience covering the latest technology and interviewing leading industry figures. He can often be sighted at tech conferences with a strong coffee in one hand and a laptop in the other. If it's geeky, he’s probably into it. Find him on Twitter: @Gadget_Ry

During Tesla’s AI Day event, CEO Elon Musk unveiled a robot that is “intended to be friendly”.

Musk has been one of the most prominent figures to warn that AI is a “danger to the public” and potentially the “biggest risk we face as a civilisation”. In 2017, he even said there was just a “five to 10 percent chance of success [of making AI safe]”.

Speaking about London-based DeepMind in a New York Times interview last year, Musk said: “Just the nature of the AI that they’re building is one that crushes all humans at all games. I mean, it’s basically the plotline in ‘War Games’”.

Unveiling a 5ft 8in AI-powered humanoid robot may seem to contradict Musk’s concerns. However, rather than leave development to parties who he believes would be less responsible, Musk believes Tesla can lead in building ethical AI and robotics.

Musk has form in this area after co-founding OpenAI. The company’s mission statement is: “To build safe Artificial General Intelligence (AGI), and ensure AGI’s benefits are as widely and evenly distributed as possible.”

Of course, it all feels a little like building nuclear weapons to deter them—it’s an argument that’s sure to have some rather passionate views on either side.

During the unveiling of Tesla Bot, Musk was sure to point out that you could easily outrun and overpower it.

Tesla Bot is designed to “navigate through a world built for humans” and carry out tasks that are dangerous, repetitive, or boring. One example task is for the robot to be told to go to the store and get specific groceries.

Of course, all we’ve seen of Tesla Bot at this point is a series of PowerPoint slides (if you forget about the weird dance by a performer dressed as a Tesla Bot … which we’re all trying our hardest to.)

The unveiling of the robot followed a 90-minute presentation about some of the AI upgrades coming to Tesla’s electric vehicles. Tesla Bot is essentially a robot version of the company’s vehicles.

“Our cars are basically semi-sentient robots on wheels,” Musk said. “It makes sense to put that into humanoid form.”

AI Day was used to hype Tesla’s advancements in a bid to recruit new talent to the company.

On its recruitment page, Tesla wrote: “Develop the next generation of automation, including a general purpose, bi-pedal, humanoid robot capable of performing tasks that are unsafe, repetitive or boring.

“We’re seeking mechanical, electrical, controls and software engineers to help us leverage our AI expertise beyond our vehicle fleet.”

A prototype of Tesla Bot is expected next year, although Musk has a history of delays and showing products well before they’re ready across his many ventures. Musk says that it’s important the new machine is not “super expensive”.